Nelson has more than 79 kilometres of sanitary sewer pipe in the ground servicing 3,100 properties in most areas of the city. The system consists of mains ranging from 150 mm to 750 mm in size, with 1,350 manholes. The piping in Lower Nelson is over 60 years old; in Rosemont, Fairview and Uphill it is in the 30-year range. 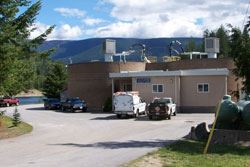 Five major lift (pumping) stations move sewage to the main Airport Lift Station on Lakeside Drive, where it is pumped through a 16-inch (450-mm) force main to the Sewage Treatment Plan (STP) at Grohman Narrows. A smaller force main pumps sewage from the North Shore under water to Lakeside Park. All North Shore and Fairview sewage is moved to the Airport Lift Station by a single interceptor pipeline along the waterfront.

The Grohman Narrows STP was commissioned in 1972. It was designed for primary treatment only and has a design capacity of 2.7 million gallons per day for a population of approximately 13,000. In 2005 the city undertook a $4 million upgrade to the plant to achieve secondary treatment status.

The average flow of sanitary sewer is about 1 million gallons per day. This amount will increase with heavy precipitation as storm drainage is interconnected with the sanitary system. Disconnecting storm connections from the sanitary system is a high priority for the city.

The City of Nelson ensures compliance with Ministry of Environment regulations by having fully qualified STP operators on staff and available 24/7. Prescribed sampling of effluent and river sampling ensures that the plant is operating according to its permit.

The following bar graph shows the amount in metres and age by decade of the sewer pipe in the city. 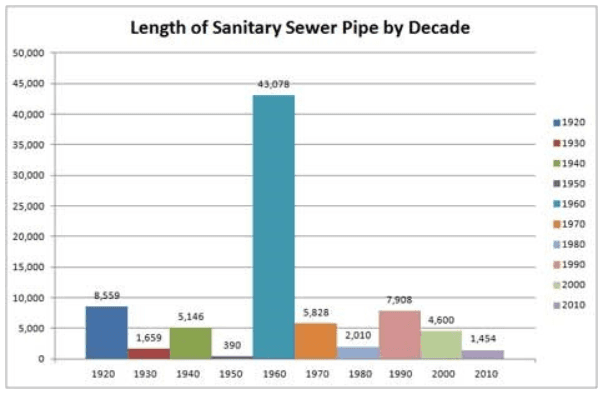