The beautifully restored Capitol Theatre originally opened on September 5th, 1927 at a cost of $75,000. Mayor J.A. McDonald presided over the opening ceremonies, lauding the theatre as one of the finest on the continent. The Capitol served principally as a movie house in the Paramount chain of leased theatres, interspersed in the schedule were live dramatic performances of traveling companies and local groups. Throughout the 1940's and into the late 1960's the theatre fell into disrepair due to wartime and neglect, the roof ultimately collapsing leaving the once beautiful venue a dank pool.

The Capitol Theatre Restoration Society formed in 1982 and on April 17th 1988 the fully restored 426 seat theatre was once again open to the public and home to many local and regional theatre groups, musicians, students and artists. 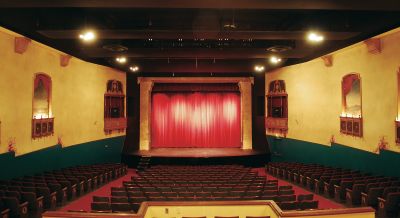 Today's Capitol Theatre hosts over 140 performances per year and averages 30,000 tickets torn each season. The Capitol presents a Subscription Season Series and a Capitol Kids Series of professional touring performances; the theatre also produces in-house a Summer Youth Theatre Program and a Christmas Pantomime. The Capitol is host to over 100 theatre rentals per annum by the local community and nationally and internationally touring organizations presenting theatre, music, films, opera, seminars and workshops. Visit the Capitol website to purchase tickets online, learn more about the theatre or to peruse our calendar of upcoming events.