Nelson’s water is considered to be of excellent quality. The city  collects, sanitizes and distributes water to all Nelson neighbourhoods  except for the North Shore. The City reservoir and chlorinator are  located in Uphill, above the Burlington Northern Railway line. Nelson  complies with or exceeds provincial regulations on water quality.

The Five Mile intake structure is the start of a 250–300 mm diameter  7,500-metre-long pipeline that transports the water to the Mountain  Station Reservoir. This supply main was installed in 1927.

The Mountain Station reservoir site includes a separate storage tank  called a contact chamber. At this chamber, chlorine gas is introduced to  the overall water supply to deactivate giardia lamblia,  bacteria and any enviro-pathogens. At both Anderson Creek and Selous  Creek chlorine gas disinfectant is introduced into the water main.

The City maintains and replaces existing water infrastructure on an  on-going basis, with the primary focus on the replacement of existing  galvanized steel pipe and cast iron mains with a history of breaks. As  well, the City completes all emergency repairs and installation of new  services.

Nelson uses an average 2,500,000 cubic metres of water a year, with  peak usage occurring between June and August. 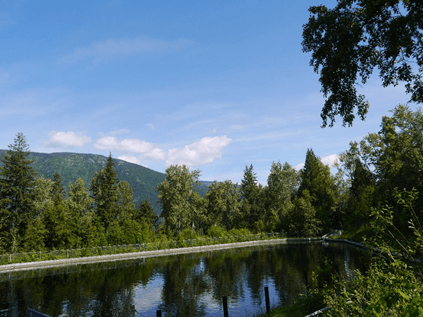 The distribution system is a fan-shaped network of gravity mains, storage reservoirs, pressure reducing 10, hydrants (319) and system valves (1,600), serving four pressure zones. There are about 87 kilometres of underground piping throughout the utility ranging in size from 50 to 400 mm. 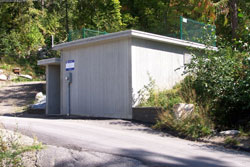