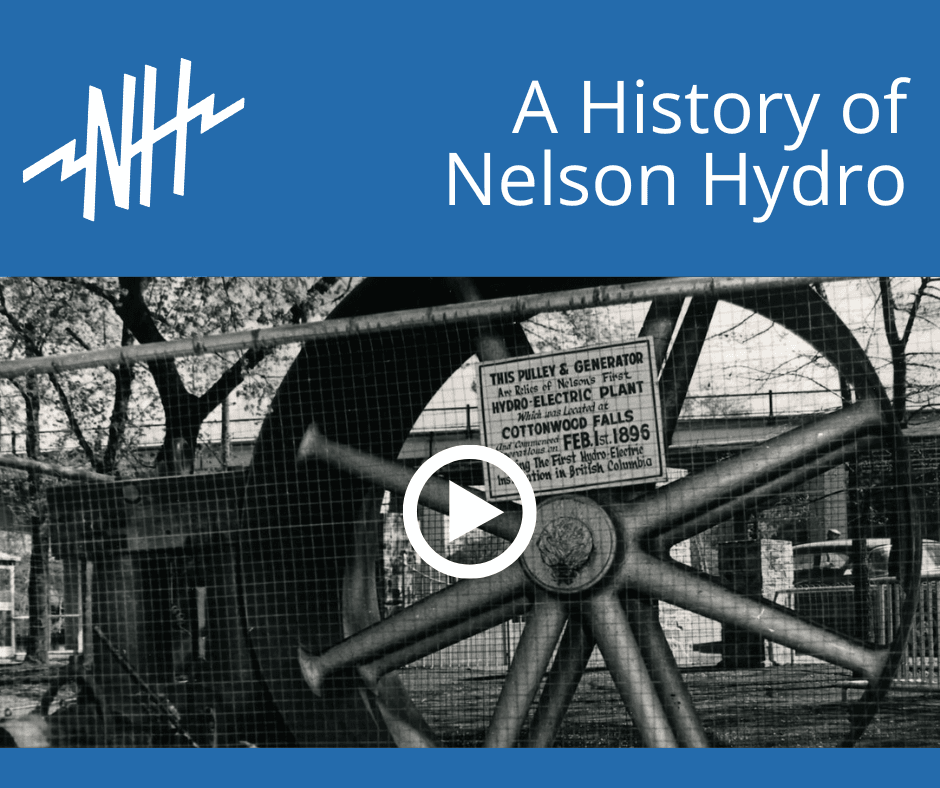 It’s what defines Nelson Hydro’s rich past, its present day opportunities and those of tomorrow. Built in 1896, Nelson’s hydro-generation system established the city as a leader among BC’s urban centers. Now, 125 years later, the pioneering utility is one of British Columbia’s few vertically integrated, municipally-owned and operated electric utilities, generating power for more than 11,000 customers throughout Greater Nelson, Taghum/Blewett/Sproule and Grohman Creek, Harrop/Proctor and Balfour. Nelson Hydro’s affordability and reliability are rooted in deep knowledge, frontline experience and a commitment to the future energy needs of our customers and communities.

On April 23, 1892 the “Nelson Miner” announced the incorporation of the Nelson Electric Light Company, by a private bill of the British Columbia Legislature.

It was announced that a contract for the installation of a plant, including a dam and flume at Cottonwood Canyon, had been let, in the amount of $25,000, with work to be completed in 60 days. Many delays were encountered before the plant was completed almost four years later! 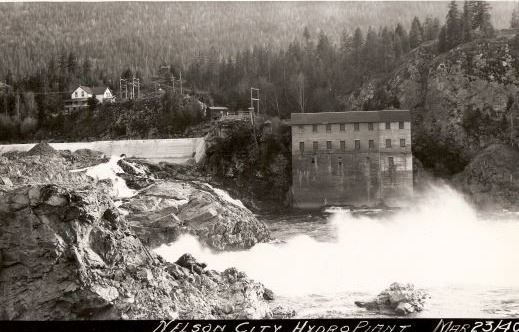 February 1, 1896, it commenced operation producing power for the City of Nelson. It was the first hydroelectric plant in British Columbia; the Sandon plant was second in March 1897. The original plant consisted of a plank flume about 500 feet long, supplying an inclined steel pipe 380 feet long, the upper half of which 16 inch diameter and lower half, 14 inch diameter. This penstock drove two 36 inch Pelton waterwheels which were belted to two 35 kilowatt direct current generators producing 110 volts.

This plant was situated behind the present day Rod and Gun Club building and the footings are still visible today!

The original plant soon proved to be far too small, and on November 27, 1897 a considerable enlargement and reconstruction was completed and put into service, making a total of four generators. In the meantime, Nelson had been incorporated as a city, with John Houston as its first mayor. He was also president of the Nelson Water Works Company and president of the Nelson Electric Light Company.

A whole hearted believer in municipal ownership of public utilities, he was in a somewhat equivocal position when he, in his public capacity, purchase, and in his private capacity, sold, the waterworks in 1897 and the Electric Light Company in 1898. The price for the later was $35,400. A great controversy raged around the Electric Light Purchase Bylaw, which had an official majority of only two votes and which was attacked in the courts. It was not until March 1899 that the purchase was finally completed

Certainly the purchase of the Electric Light Plant did not prove very satisfactory even to its friends. In September of 1898 the flow in Cottonwood Creek was so small that all street lights and a considerable number of residents lights had to be cut out. There were no meters and meter rates in those days, and people burned all the light they were entitled to under the flat rates, and often a great deal more. The council in 1899 made great efforts to remedy the difficulties. They diverted the water of Whitewater Creek from the water shed of the Salmo River into the headwaters of Cottonwood Creek by means of a plank flume, 36” wide 20” deep and 9,200 feet long, costing approximately $12,500.

In 1899 a contract to rearrange the power house and install a 150 k. w. Alternating current machine to light those portions of the city east of Josephine Street and south of Silica Street. The four D.C. machines continued to serve the closer in portions of the city. This work was completed in November and the new machinery put into operation. A shortage of water was still the main problem, even with the diversion of Whitewater Creek the flow during the cold of winter was only about six cubic feet per second. Two attempts were made at increasing the water storage, both which failed with disastrous results but luckily no injury or loss of life. This plant continued to supply the city with light until early 1907, when the new municipal plant at Upper Bonnington Falls took over its duties, and the old plant was closed down. The above was obtained from a paper written by Boyd C. Affleck in 1933.

In December 1900 City Engineer Andrew L. McCulloch (not the McCulloch of the Kettle Valley Railway) and Mayor Houston made a trip to Bonnington Falls, exploring a site on the south side of the river above the West Kootenay number 1 plant. The City of Nelson was deeded 40 acres on the south side of the river at Bonnington as a power site. With this came a token water licence of 1000 miners’ inches of water or 28 cubic feet per second, much to the chagrin of Lorne Campbell and the West Kootenay Power and Light Company. On March 6th 1904 Mayor Jim Hamilton applies for and is granted a licence at upper Bonnington Falls for 50,000 miners inches, or 1400 cubic feet per second. This brings the total licence to 1428 cubic feet per second, at least three times the capacity of the Cottonwood Falls plant. The municipal council in January, 1905, engaged Mr. Clemens Herschel of New York to design the Power House and the construction was supervised by City Engineer A.L. McCulloch, commencing on April 3, 1905. This original design was to accommodate a total of four units.

Spring, 1905 West Kootenay Power and Light Company officials obtain a court injunction restraining the work at the Bonnington project on grounds that rocks dislodged by blasting were blocking the flow of water to their turbines and even damaging their machinery. Construction ceased. West Kootenay had previously staked a mineral claim about where the city power house would go, and were tunneling in search of the precious metal there.

In August 1905, Mr. Justice Irving upheld West Kootenay`s claim and ordered the city of Nelson to pay the court costs. January 1906 the City appeals the case to the Supreme Court of B.C. on grounds that West Kootenay had selfish interests in that it would lose $10,000- $12,000 per year in power sales (through the Nelson Electric Tramway Company) when the project was completed. Chief Justice Hunter decides in favour of the City of Nelson. Work goes ahead at Bonnington; a Spur was installed by the C.P.R. at Bonnington Falls to unload materials and machinery then to be loaded onto a Scow guided by a cable across the river at the head of the falls. From January 15 1906 till April 1 1906 a crew of approximately 100 men were at work on the site excavating 17,000 cubic yards of rock for the intake canal and powerhouse, this had to be done before spring runoff.

January 27, 1907 the new City Power Plant with Generating Unit 1 (750 kW), successfully started operations. All the city lights, except those on Baker Street not previously on the West Kootenay Power and Light Company, came from the City Plant. The Remainder will be cut in the next day, except for the tramway which will be held over until the plant is in perfect running condition.

The use of electricity quickly grew and Unit 1 was soon nearing its capacity to keep up. September 17 1908 voters of Nelson approve a by-law of $85,000 to provide for a second unit at Bonnington Falls plant. Ballot count, Yes votes: 1976 No votes: 24

No major changes were made during the First World War, but as soon as peace came, the North Shore began to agitate for electric power, resulting in a successful by-law for supply to Willow Point in 1923, and eventually to Woodbury Creek to serve the Kootenay Florence Mine. By 1928 the plant had again reached its generating capacity, and a by law was prepared to ask Nelson voters to approve construction of a third unit at Bonnington. The voters approved, and construction began.

Local Mr. Joe Irving was among the workers on the construction of Unit 3, a young lad at the age of 17 who started his life-long career as an ironworker on this project. The economic benefits of the city owned utility were listed in a talk which long-time city clerk, W.A. Wasson gave in 1937.

In 36 years of operation of city owned power plants, $2,776,191 had come to into the city coffers, allowing for such “luxuries” as cheap electricity, the Civic Centre, and the stability of the city finances. By the end of the Second World War the city was again at the limit of its power generation, and a by-law was passed in 1946 to add a “fourth and final unit” of 6,500 horsepower. 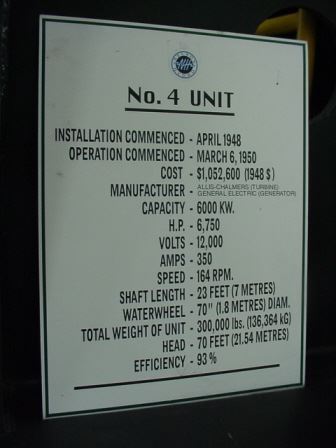 The new unit opened by Mayor Thomas Waters on December 7, 1949. Earlier in 1949 the controller of water rights of B.C. had written to the City suggesting that in view of possible effects of developments on the Columbia River, Nelson might want to consider the usefulness of an additional 1,400 cubic feet of water over and above its existing license. The City replied that indeed it would like to apply for the additional water, but was advised that the fee for such an application would be about $2,500 and that a refresher fee would be required every six months until the license was issued. Furthermore, a licence could not actually be issued until the water came available some years later.

The City agreed to leave the matter in abeyance. In 1956, the city applied again, and was told that an order in council in 1955 had put a reserve on all available water, but needs would be noted for the future. Applying again in 1962, Nelson received the devastating news that a license had now been issued to B.C. Hydro, giving that corporation the rights to store water at the Duncan River, and receive all the downstream benefits. Now, no new licence could be issued to Nelson without consultation with other licences. To cut a long story short the city came close to losing the Plant in the early 1970`s because of the construction of B C Hydro Kootenay Canal Project. Land expropriation and loss of water use were the main issues, thanks to the hard work of opposition parties in Victoria and at home a settlement was made and the City Plant continued to operate at a reduced capacity once the Kootenay Canal Project was completed in 1975. In 1988 the City plant received an additional 265 cubic feet per second extra water on their license, which would allow Unit 2 to run again. This unit had been shut down since the Kootenay Canal Project was completed. 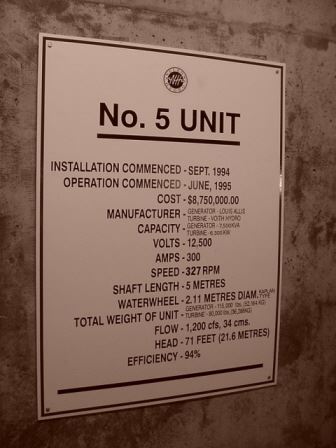 In 1993 the voters of Nelson approved a record $8.75 million bylaw to build a new Power House and generator just downstream of the old Plant. This was done to remove Unit 2 (1910) and Unit 3 (1930) from full time use, and to maintain that the Licensed Water was being used efficiently. Unit #5 is quite different from the other units, in that its main shaft runs horizontal rather than vertical and the turbine is a Kaplan type which resembles a ships propeller. The blades on the turbine change in angle via computer control to make the most efficient use of the water at a wide range of power outputs, anywhere from 1000 kW to 7000 kW. The turbine receives its water through a 100 meter long tunnel that was drilled and blasted through solid rock up to the existing forebay.

The powerhouse is built of concrete and approximately half of its height is located below water level. This is done to decrease the effects of cavitation on the turbine.

Generator 5 was completed in June 1995, with a rated capacity of up to 7500 kW. It is now possible to perform repairs and maintenance on other generation units and still maintain the licensed total output. 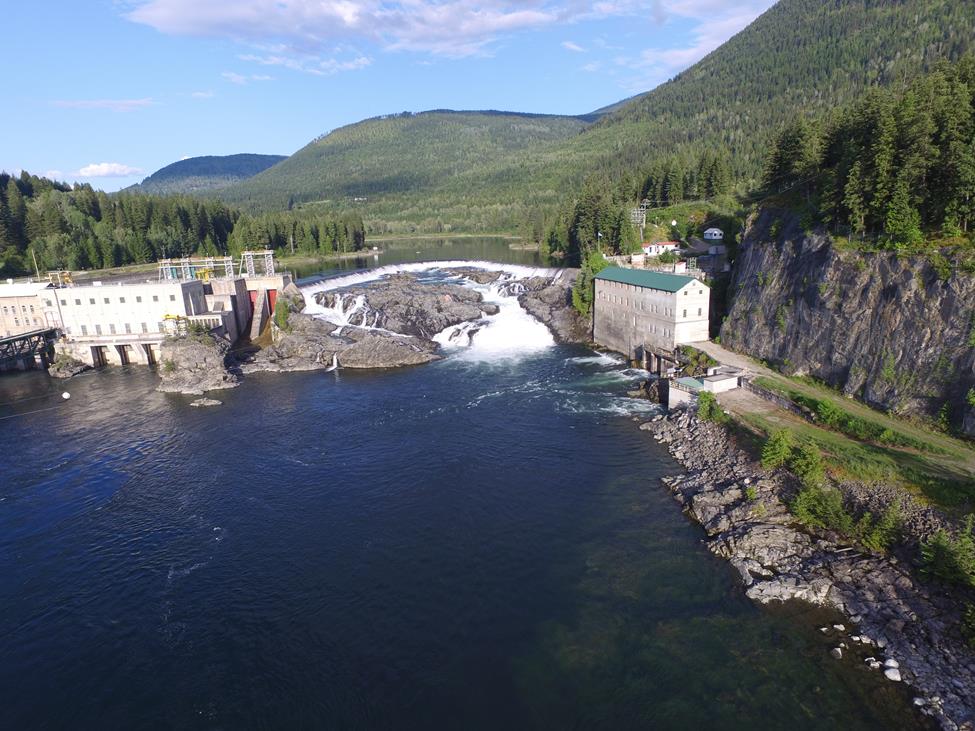