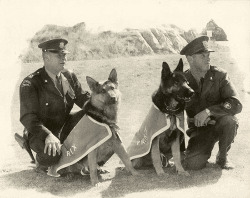 The Nelson Police Department is among the oldest in the Province. It came into being as a municipal police force on April 17th, 1897. Nelson’s vibrant history is matched by the lively personalities who have served on this police authority over the years.

The initial force consisted of a Chief Constable and one Constable. Robert A. Winearls, appointed the first Chief Constable, quit over a salary dispute less than one month after he was hired, on May 9th, 1897. His successor was Seneca G. Ketchum, who acted in the capacity of Chief until the next Chief was appointed. The salary at that time of $65 per month was debated frequently during those early days at City Council, and was increased to $80 per month on June 7, 1897.

The Chief of Police submitted regular reports to City Council, and the following was reported for the month of May 1897:

In early summer 1897, while Ketchum was still Chief of Police, Nelson celebrated a sequence of holidays, the first being the Queen’s Jubilee and the second being the Fourth of July. The celebrations became so extreme that the whole city’s government became incapacitated from doing business for a week. Ketchum was quoted in the Nelson Daily Miner (March 20, 1899) saying that the Mayor began the celebration and was found to be celebrating in a manner “altogether wild and western,” and that he was compelled to arrest him. When the Mayor realized he was being arrested, he attempted to discharge Ketchum from his duties, but Ketchum resisted. The two men eventually settled their differences and decided to celebrate together. Apparently, the City Clerk could not do anything without the Mayor so he played poker. The policemen could not do anything without Ketchum, so they quit work, and as a result the machinery of government came to an abrupt halt. Ketchum was further quoted to say that if the Queen had known what was going to happen, she would have postponed the Jubilee.

By December 1897, Alexander McKinnon had been appointed the Chief of Police and is reported to have suspended a patrolman for settling a dispute by fighting. The patrolman was, in effect, laid-off for conduct unbecoming an officer. 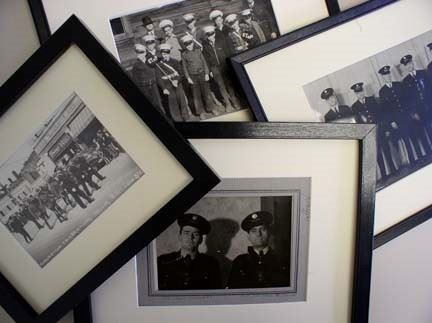 In the early days of Nelson, the brothels were situated at the east end of Baker Street. By the beginning of the 1900s, public discontent led to the relocation of the brothels to Lake Street. The women of Lake Street were rarely seen in public, as they needed special permission from the Chief of Police to go out during the day.

Historical urban legend has Nelson policemen throwing rocks against the side of the houses on Lake Street, knowing that they would get called, and once their investigation was complete would get invited in for a beer. They conducted regular raids of the Lake Street houses and fines were given to the inhabitants. Further rumour involves reports that one Madame got so tired of the police raids that she went to City Council and offered to buy new uniforms for the Police if they agreed to leave her establishment alone. Apparently, City Council agreed.

One of Nelson’s longest standing Chiefs was Thomas Long, who served as Chief from 1914 to 1932. He came to Nelson after serving as Chief of Police in Rossland for ten years. Chief Long was involved in many incidents during his time in Nelson, including one in 1922 which involved arresting a one-armed gun carrier named Edmund Ralph. Apparently Gus Stenburg, who had rooms and a restaurant on the north side of Vernon Street, attempted to disarm Ralph, who had been eating in the restaurant and who had been seen with a gun. The two started wrestling and ended up out in the middle of Vernon Street. Ralph shot Stenburg in the chest and temporarily escaped. The Police and Ralph met at the train station as Ralph emerged from the shadows at the last minute to board the train to the Coast. Chief Long fired twice at Ralph’s hand as Ralph fired at Sergeant Stewart. After the gun battle Ralph was taken into custody and charged with the murder of Stenburg.

The longest standing career of a Nelson policeman was that of Robert Harshaw, who joined the force in 1930. He was promoted to Sergeant in 1932 and became the Chief of Police in 1947 when George Bone retired. Harshaw held the Chief’s position until his retirement in 1965. One of his most prominent recollections involved a full melee that broke out in a beer parlour on March 31st, 1934. Chairs flew, glasses broke and the pub was in shambles. Harshaw had been walking the beat for three years and was no stranger to danger. The standard operating procedure when dealing with combatants was to remove the combatants, take them outside and cool them down with a little talk, but this time things were different. One participant walloped Harshaw in the chest and knocked the wind out of him. A battle ensued and ended with the aggressor being handcuffed, but as he was being put into the paddy wagon, two of his followers leapt at Harshaw with the handcuffed prisoner joining in once again. This time the public stepped in to help and more fists flew. Harshaw finally settled the issue and the end result was a fine of $25 and a drunken conviction for the instigator. No other charges were laid, as fighting was a way of life in those days.

Harshaw always believed that the beat officer was a very important position. By being out on the street on foot, the officer was part of the community and the community came to his assistance when needed. The early days of policing in Nelson had beat officers out on Baker Street without today’s radio and computer systems of communication. Two beacon lights were set up in strategic locations - one at the east end of Baker Street, by the hospital, and the other one on Ward Street. These lights were used to warn the patrols of trouble. If the beacons were lit, the patrols would phone the office to find out the trouble. If a vehicle was needed, a taxi was used to get to the location. Taxis were used to transport prisoners to jail, and injured parties to hospital. 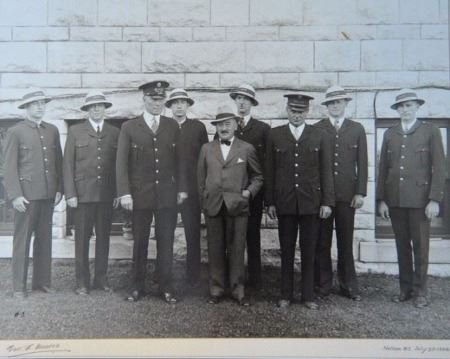 Location of the Police Station

The location of the Police Station itself also features a diverse history. The initial Police Department, along with City Hall offices, was housed in a small building at the foot of Front Street. When the Provincial Jail facility vacated its premises at the location of the present City Hall White Building, the Police Department had grown sufficiently to utilize the larger facility, complete with existing jail cells. At various points in their history, the Police Department occupied the second floor of a building at the corner of Vernon and Stanley Street and the bottom floor of the building housing the present Salvation Army store at the foot of Josephine Street. The Department finally moved to its existing quarters at 606 Stanley Street in 1992, the former location of the Nelson Detachment of the RCMP. The current home also accommodates the By-law Officers and Victim Services, and the Cell Block at this location also serves as a remand centre for RCMP prisoners.

Over the hundred and twenty-four years of its existence, the Nelson Police Department has grown from two to twenty members. Chief Constable Donovan Fisher has been the Chief Constable since 2021. Today, the Nelson Police deal with a wide range of problems. Our modern, technologically dependent society has produced a complex web of laws which must be enforced by police. Societal and cultural evolution has resulted in more stringent standards for conduct of police members. But the fact remains that today, as in 1897, Nelson is a community still small enough for its residents to know and help each other. Community-based policing is a much desired concept in many other communities in the twenty-first century, but it has always been a fact of life in Nelson. Nelson residents can still experience the presence of the beat officer patrolling on foot on its historic streets.